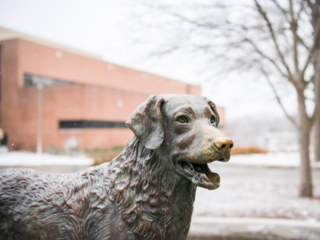 Need a winter class to round out your schedule this year? Consider taking a class with GWST!
All our winter classes are going to be fully online this winter and all carry GEP credit.
GWST210 - Introduction to Critical Sexuality Studies
Dr. Kate Drabinski
This course introduces students to the field of critical sexuality studies. Using an interdisciplinary approach, the course conducts a critical inquiry into the historical precedents and theoretical frameworks necessary to understand the role of sexuality in shaping personal, social, economic, and political life. The course focuses on patterns of subordination and exclusion based on individuals¿ sexual practices and identities, explains the origins and persistence of those patterns, and considers ways of challenging them. Throughout the course, special attention will be given to intersections of sexuality with gender, race, ethnicity, religion, class, and disability.
Crosslisted with AMST210.
GEP: Culture, Social Sciences
GWST321 - Queer Representations in Film and Television
Online, asynchronous
Dr. Kathryn Kein
This course will utilize films, television programs and theoretical, historical, and analytic readings to focus on the ways in which LGBTQ people and queer issues have been represented historically in film and television, and how issues of homosexuality intersect with issues of race and gender. Using material from before and after the modern LGBTQ rights movement, we will explore such themes and stereotypes as sissies, mannish lesbians, cross dressing/drag, AIDS, transgender, bisexuality, and others.  Recommended Preparation GWST 100, GWST 200, or permission of instructor.
GEP: Arts and Humanities
GWST323 - Gender and Sitcoms
Online, asynchronous
Dr. Susan McCully
The course studies the relationship between changing gender roles and the leading ladies of television situation comedy between the 1950s and the 1990’s with particular emphasis on the sitcom form and the representation of domesticity. The course explores the second wave of US feminist history and shifting sitcom roles of wife, mother and working women during this period. Text studied will include: Mary Tyler Moore, The Honeymooners, Leave It to Beaver, Murphy Brown, I Love Lucy, Bewitched, Roseanne, The Burns and Allen Show and Father Knows Best. Feminist readings, analysis and discussion support the understanding of the media.
GEP: Arts and Humanities
Tags: coursepromotion
0 Comments (requires login)