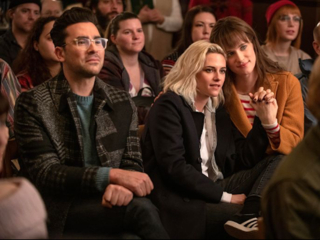 This winter, Hulu broke opening-weekend streaming records with Happiest Season, the first holiday rom-com from a major studio to center a same-sex couple. If you’re one of the many who saw the film and want to seek out more queer representation in film and television, GWST 321 is for you!

In Queer Representation in Film and TV, we’ll watch and read about some of the most noteworthy films and shows featuring queer characters and stories. We’ll catch some of the firsts, some of the greats, and even some…not-so-greats. In a quick online winter session, you’ll complete a full 3-credit GWST course, pick up an Arts and Humanities GEP, expand your knowledge of film and TV with queer elements, and hone your analysis skills. Check it out at: https://highpoint-prd.ps.umbc.edu/app/catalog/classsection/UMBC1/2210/1207